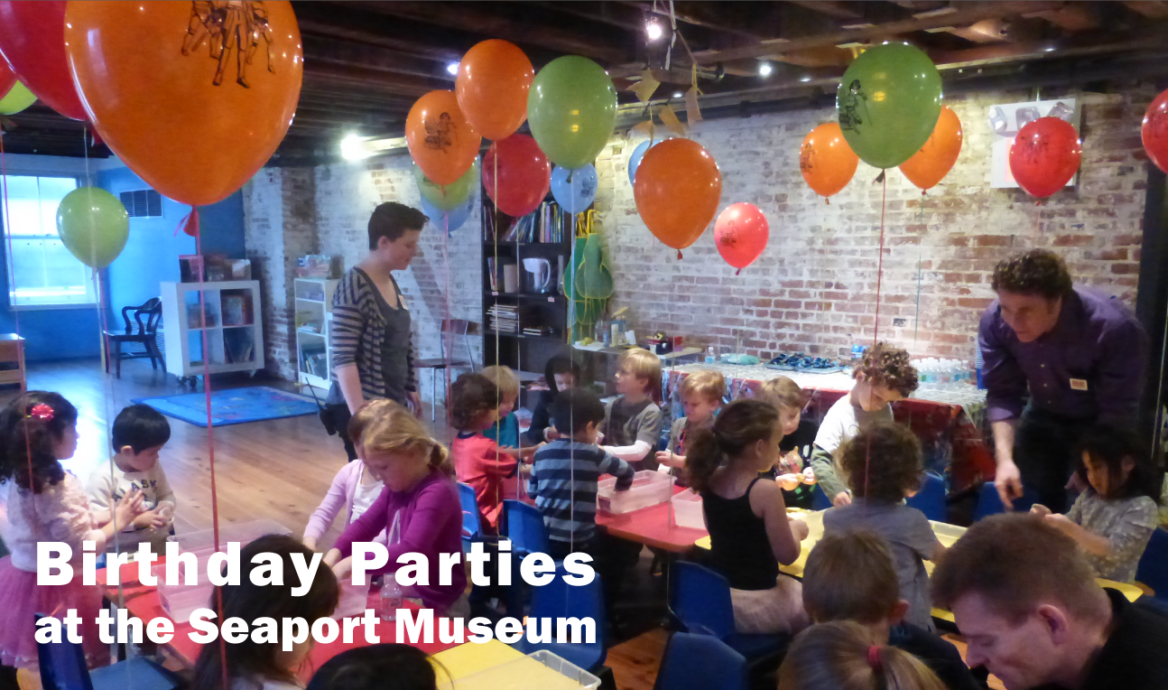 Little Tug Birthday Party (for children ages 1-3)
With activities inspired by Stephen Savage’s critically acclaimed picture book Little Tug, this fun-filled birthday party features five interactive stations for children and their caregivers to enjoy. Meet live sea critters from the East River, play sink or float at our water table, color in your own Little Tug and hear the story of Little Tug who helps in a big way.

Pout-Pout Fish Birthday Party (for children ages 4-5)
Discover some of the sea creatures who live in New York Harbor at a Pout-Pout Fish themed birthday party, inspired by the New York Times bestselling book by Deborah Diesen and Dan Hanna. This underwater-friends party features the chance to hold some of East River sea life, a story-telling of a small town fish and her dreams to make it in the big city followed by a fun and active game, plus the opportunity to create a group Pout-Pout Fish birthday banner for the guest of honor.

Little Tug and books in The Pout-Pout Fish series are available for purchase as giveaways for parties at a special discounted price.

Float Your Boat (for children 4-5) – Ahoy sailors! This boat themed party features the chance for kids to build their own boats, play sink or float, race sailboats at our water tables, a puppet show telling the story of a small tug boat who wanted to race up the Hudson River, and play a nautical navigation game where participants must find safe harbor.

The South Street Seaport Museum Visit
You will receive a Museum admission card for two for each child that will allow two adult/senior/student guests to explore New York’s interactive historical experience-whenever they want. (Does not include sails on W.O. Decker or Pioneer)

“A little-known gem of the city for parties –
Large, open, safe, lots of toys and areas to do activities in”
– Beth Conlon, birthday host parent

1885 Tall Ship Wavertree
Welcome aboard the party of a lifetime! Have your special day on the one-of-a-kind Wavertree, the last existing three-masted, iron-hulled cargo ship in the world. Raise the sail*, experience the power of the capstan with a game of tug o’ war, take photos at the helm, learn to navigate and tie knots, and earn your sea legs with this fun and interactive party aboard a real sailing ship that once transported cargo around the world.
*Weather permitting

About the South Street Seaport Museum
The South Street Seaport Museum, located in the heart of the historic seaport district in New York City, preserves and interprets the history of New York as a great port city. Founded in 1967, the Museum houses an extensive collection of works of art and artifacts, a maritime reference library, exhibition galleries and education spaces, working nineteenth century print shops, and an active fleet of historic vessels that all work to tell the story of “Where New York Begins.” www.southstreetseaportmuseum.org