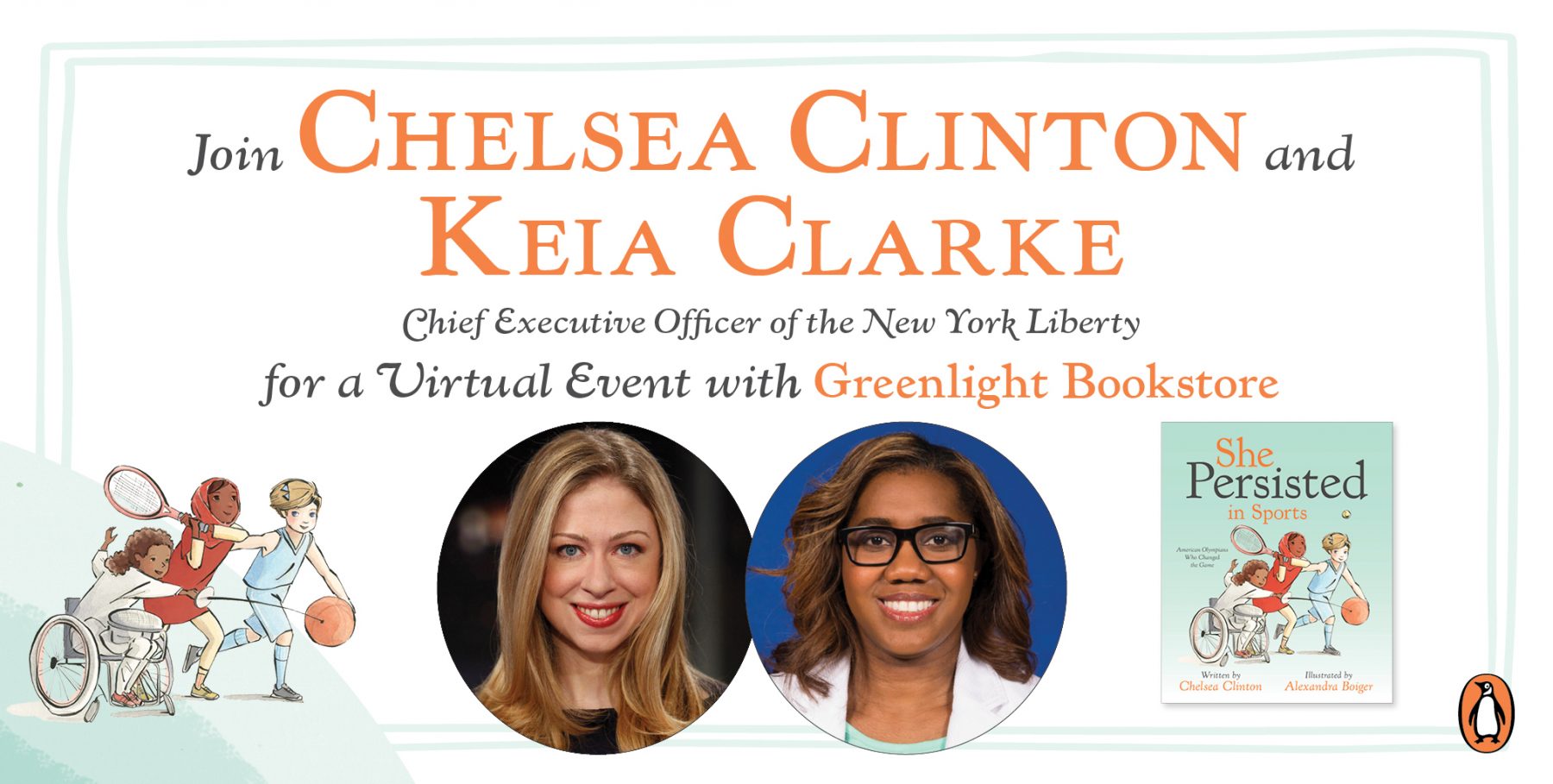 About the Event:
#1 New York Times bestselling author Chelsea Clinton and Keia Clarke, Chief Executive Officer of the New York Liberty, will join Greenlight Bookstore on October 1 at 5PM ET for a live virtual event to celebrate the launch of She Persisted In Sports: American Olympians Who Changed the Game.

The event will take place on Zoom, where you can submit questions to the host during the event.

**This is a virtual event that will be hosted on Zoom – you will need access to a computer or other device that is capable of accessing and sufficient Internet access.

** Tickets $5 for event access only, $25 or $35 including book and bookplate.  Book-bundled ticket prices include New York sales tax and a $5 handling fee; orders for shipping include the cost of UPS shipping.

About the Book:
SHE PERSISTED IN SPORTS: American Olympians Who Changed the Game, the third book in Chelsea Clinton and Alexandra Boiger’s #1 New York Times bestselling She Persisted picture book series, celebrates American women who have faced their own unique set of challenges, across countless sports and levels of play, and excelled because of their persistence. Women in the book include athletes from the Tri-State area Margaret Ives Abbott, Gertrude Ederle, and Ibtihaj Muhammad along with Mildred “Babe” Didrikson Zaharias, Wilma Rudolph, Jean Driscoll, Mia Hamm and the 1996 Olympic soccer team, Kristi Yamaguchi, Venus and Serena Williams, Misty May-Treanor and Kerri Walsh Jennings, Diana Taurasi, Simone Biles, and Jocelyne and Monique Lamoureux. A Spanish-language edition, ELLA PERSISTIÓ EN EL DEPORTE, will be concurrently released.

About the Author:
Chelsea Clinton is the author of the #1 New York Times bestselling picture book She Persisted: 13 American Women Who Changed the World, which was praised in a starred review by Publishers Weekly as a “lovely, moving work of children’s literature [and a] polished introduction to a diverse and accomplished group of women.” She is also the author of the picture book Grandma’s Gardens, co-written with Hillary Rodham Clinton, as well as the New York Times bestsellers Don’t Let Them Disappear; Start Now! You Can Make a Difference; She Persisted Around the World: 13 Women Who Changed History; It’s Your World: Get Informed, Get Inspired & Get Going!; The Book of Gutsy Women: Favorite Stories of Courage and Resilience, co-written with Hillary Rodham Clinton; and Governing Global Health: Who Runs the World and Why?, co-written with Devi Sridhar. Chelsea Clinton is the Vice Chair of the Clinton Foundation, where she works on many initiatives including those that help to empower the next generation of leaders. She lives in New York City with her husband, Marc, their children, and their dog, Soren. You can follow her on Twitter at @ChelseaClinton or on Facebook at www.facebook.com/chelseaclinton.

About the Interviewer:
Keia Clarke is entering her first season as Chief Executive Officer of the New York Liberty. Prior to becoming CEO, Clarke was Chief Operating Officer of the team for two seasons. Clarke is currently in her tenth season with the Liberty, previously serving as the Liberty’s Manager of Marketing for four seasons, prior to her promotion to Director in 2015, and Vice President for Team Business Development in 2017. Prior to joining the Liberty, Clarke worked on all areas of WNBA business as a member of Team Marketing & Business Operations (TMBO) at the NBA/WNBA league office. She also worked as a Marketing Analyst for Golf Digest Magazine and began her career as an Account Executive for the Naismith Memorial Basketball Hall of Fame in Springfield, Mass. Among her many awards, the Westchester County Business Council named Clarke to its 2018 class of Rising Stars. In 2019, Clarke was recognized by Crain’s New York Business as a “Notable Woman in the Business of Sports”. In 2020, Clarke was also named to INvolve’s 2020 list of Top 100 Ethnic Minority Executives. Clarke attended Canisius College where she was a four-year member of the women’s basketball team, graduating in 2003 with a degree in Marketing. She went on to earn a Master’s in Sports Business from New York University in 2006. Clarke resides in New Jersey with her husband, Brian, and their two children, daughter Avery and son Gavin.