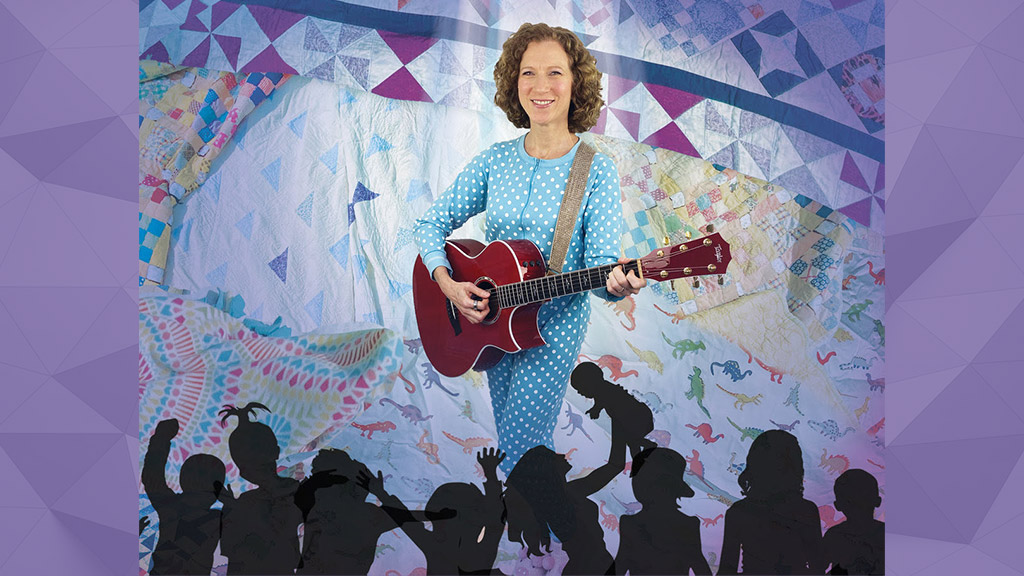 Get out the sleeping bags, pillows, blankets, stuffed animals, and snacks! Iconic children’s musician Laurie Berkner invites everyone to stay in their pajamas and join her for a special “Pajama Party” LIVE Virtual Family Concert on Sunday, September 20 at 12:00 p.m. Eastern Time on Laurie’s website: HERE.

“I am so excited to be coming back with my third Virtual Family Concert!” says Laurie Berkner. “We have already started building our own pillow and blanket fort for the set of our Pajama Party, and I’m really looking forward to all of the singing and games we’ll be playing together. I’m also so grateful to all of the many fans who are supporting me as an artist by attending these events. And I can’t wait to do an entire show in my pajamas!”

Fans of all ages should plan to grab their instruments (or noisemakers), their dancin’ shoes (or slippers), their superhero capes (or blankets), and a stuffed animal (for their heads)!

Laurie will set the mood with her beloved children’s classic, “Pajama Time!” She’ll lead kids and grownups alike in pajama party pertinent activities, like searching for pillows among the onscreen graphics, and singing along to songs like “Pillowland,” “Popcorn Calling Me,” “The Silly Brushing Song,” “Bubbles,” and “Moon Moon Moon.” Laurie will include make-believe and games at her Pajama Party, with such tunes as “Superhero,” “Come Out, Come Out,” and “Shake Your Body Down,” and she promises to sing an array of fan favorites like “Waiting for the Elevator” (the title track of Laurie’s most recent, NAPPA award-winning album), “Victor Vito,” “I Really Love to Dance,” and “Pig On Her Head.” Laurie Berkner Band member Susie Lampert will even drop in to spend a bit of time at the Pajama Party!

A fun-filled virtual lobby will feature pre-show music, a scavenger hunt, and a craft activity. For those who’d like to spend a few minutes chatting one-on-one with Laurie after the show, special Meet-and-Greet tickets are available.

One of the most popular children’s entertainers in the U.S., Laurie Berkner has filled countless venues nationwide with adoring fans. Her secret? Laurie’s shows are participatory throughout; her songs get kids (and adults) on their feet to sing, clap, and dance along. She keeps even the youngest audience members fully engaged with dynamic expressions of musical joy in active songs like “I’m Gonna Catch You” and “Rocketship Run” and gives everyone a chance to catch their breath between high-energy moments by including quieter interludes featuring songs such as her classic “Moon Moon Moon.” Laurie displays an instinctive understanding of children’s natural rhythms and energy in her shows, which keeps kids enraptured and brings parents happily along for the ride.

With an average of more than 12 million monthly streams and millions of albums, songs, and DVDs sold, Laurie’s songs have become beloved classics for children worldwide. The first artist to ever appear in music videos on Nick Jr., Laurie Berkner was featured in nearly all the episodes of the channel’s Jack’s Big Music Show. Laurie recently created her own Audible Original Series titled Laurie Berkner’s Song and Story Kitchen. She has released thirteen bestselling, award-winning albums and is a familiar radio presence on SiriusXM’s Kids Place Live. Laurie has authored a number of picture books based on her songs, the most recent of which were published by Simon & Schuster. She has also written the music and lyrics for three Off-Broadway children’s musicals produced by New York City Children’s Theater. Laurie has performed at Lincoln Center, Carnegie Hall, and the White House, among many other prestigious venues.

Each Regular Family Ticket includes access to the livestream for one device and an exclusive “welcome” video from Laurie herself.

– Two-Minute Virtual 1-on-1 Private Meet & Greet with Laurie Berkner after the show. Participants will be called directly when it is their turn.
– Virtual Photo Opportunity with Laurie Berkner.
– Recording of video session emailed to ticket holder 3 days post-event.
– Opportunity for parents to chat with fellow families in the Virtual Waiting Room while awaiting their turn in line.
– Live tech support.

*Need-based tickets, intended for those who truly need a discount, are available.