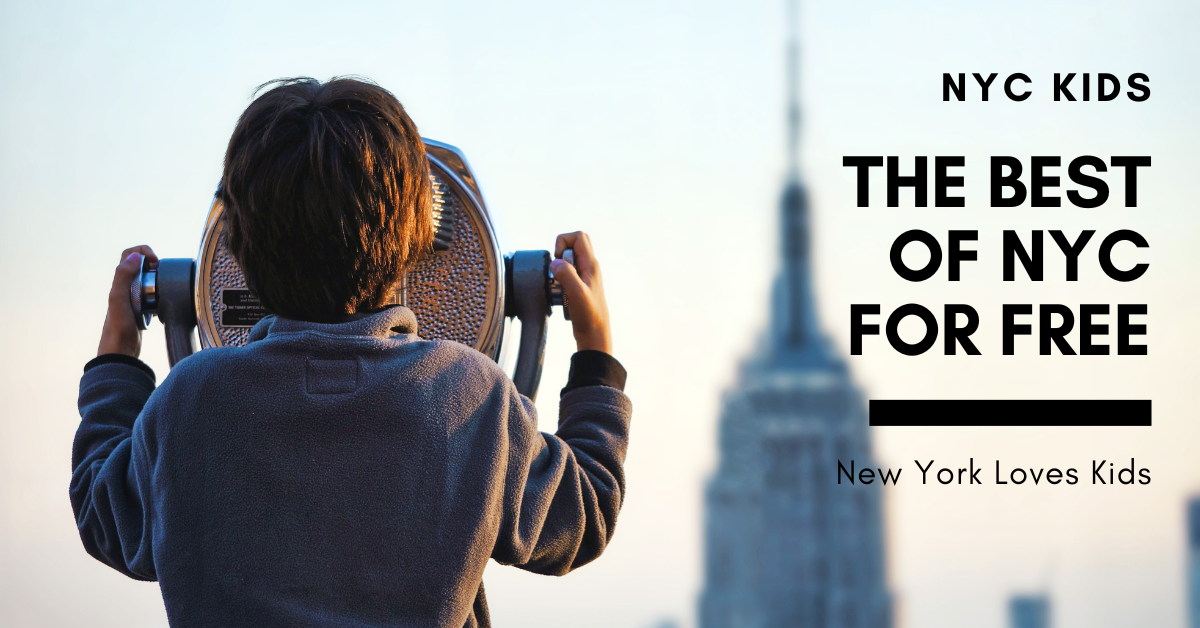 28 Jul The Best of NYC With Kids for Free

Posted at 06:30h in Uncategorized by NYLK 0 Comments

We all know that having fun with our kids in the City can be heavy on the wallet, so we have listed a number of places to visit which are FREE. Others are free at certain times, or have a suggested donation, so you can pay what you can afford.

If you time your visit right, you can have an amazing day out with your little ones, and not have to worry about how many dollars you are having to spend to do so.

The 9/11 Memorial & Museum is the country’s principal institution concerned with exploring 9/11, documenting its impact, and examining its continuing significance. Honoring those who were killed in the 2001 and 1993 attacks is at the heart of our mission.

(Free Admission Monday tickets will be available on the website each Monday beginning at 7 a.m. ET and are first come, first serve. Last entrance is 3:30 p.m.)

Since 1961, the American Folk Art Museum has been the leading institution shaping the understanding of art by the self-taught through its exhibitions, publications, and educational programs. As a center of scholarship, it showcases the creativity of individuals whose singular talents have been refined through personal experience rather than formal artistic training. Its collection includes more than eight thousand works of art from four centuries and nearly every continent—from compelling portraits and dazzling quilts to powerful works by living artists in a variety of mediums.

The American Museum of Natural History is renowned for its exhibitions and scientific collections, which serve as a field guide to the entire planet and present a panorama of the world’s cultures.

The Bronx Zoo spans more than 265 acres, which means there are plenty of opportunities for you to connect with the animals you love. Whether you want to watch the bison graze, or hear from the experts during a keeper chat, the zoo has got you covered.

Brooklyn Botanic Garden is an urban botanic garden that connects people to the world of plants, fostering delight and curiosity while inspiring an appreciation and sense of stewardship of the environment.

The Brooklyn Museum is an art museum located in the New York City borough of Brooklyn. At 560,000 square feet, the museum is New York City’s third largest in physical size and holds an art collection with roughly 500,000 objects.

Currently closed – doing virtual and off-site events – once open, it’s pay as you wish on a Thursday from 4:00pm – 6:00pm

Children’s Museum of the Arts unites children and artists to create and share ambitious works of art.

Pay What You Wish, Wednesday through Monday, 5pm to 6pm
Under 18’s are free at all times

Cooper Hewitt is the only museum in the United States devoted exclusively to historical and contemporary design, and is the steward of one of the most diverse and comprehensive design collections in existence—more than 215,000 design objects spanning 30 centuries. From ancient textiles and works on paper to icons of modern design and cutting-edge technologies, Cooper Hewitt’s collection serves as inspiration for creative work of all kinds and tells the story of design’s paramount importance in improving our world.

The mission of El Museo del Barrio is to present and preserve the art and culture of Puerto Ricans and all Latin Americans in the United States. Through its extensive collections, varied exhibitions and publications, bilingual public programs, educational activities, festivals and special events, El Museo educates its diverse public in the richness of Caribbean and Latin American arts and cultural history. By introducing young people to this cultural heritage, El Museo is creating the next generation of museum-goers, while satisfying the growing interest in Caribbean and Latin American art of a broad national and international audience.

Committed to innovation, the Solomon R. Guggenheim Foundation collects, preserves, and interprets modern and contemporary art, and explores ideas across cultures through dynamic curatorial and educational initiatives and collaborations. With its constellation of architecturally and culturally distinct museums, exhibitions, publications, and digital platforms, the foundation engages both local and global audiences.

Lehman College Art Gallery has been serving the interests of our diverse audience from the Bronx and greater New York City since 1984. The gallery specializes in thematic group exhibitions that bring together famous artists with emerging talents. Education is an integral component of the Gallery’s programming and provides the basis of community outreach—from young students to senior citizens.

FREE Admission: In celebration of receiving a generous donation from Mackenzie Scott, the Museum will offer free admission for all throughout the run of the Responses exhibition (until September 18, 2022)

MOCA preserves, presents, and explores the diverse history, heritage, and culture of people of Chinese descent in the United States.

Free admission for New York City residents on the first Friday evening of every month, from 4pm to 8pm.
Under 16’s are free at all times

The Museum of Modern Art and MoMA PS1 celebrate creativity, openness, tolerance, and generosity. It aims to be inclusive places – both onsite and online – where diverse cultural, artistic, social, and political positions are welcome. It’s committed to sharing the most thought-provoking modern and contemporary art, and wants you to join in to explore the art, ideas, and issues of our time.

The only U.S. museum devoted to film, television, and digital media. The Museum of the Moving Image is focused on art, history, technique and technology of film, television, and digital media. It collects, preserves, and provides access to moving-image related artifacts via multimedia exhibitions and educational programming. The exhibits include significant audio/visual components designed to promote an understanding of the history of the industry and an understanding of how it has evolved.

The National Museum of the American Indian in New York advances understanding of the Native cultures of the Western Hemisphere.

Admission is free after 3:00pm on Wednesdays at the Aquarium. Advanced timed tickets are required. The Wednesday Afternoon Ticket Store will open on Monday at 3:00pm for that Wednesday’s reservations.

From sea lion shows to penguin feeds, sand tiger sharks and common cuttlefish, there are a lot of marine animals for you to meet at the Aquarium.

New-York Historical Society (including DiMenna Children’s History Museum)
Pay as you wish on a Friday from 6:00pm – 8:00pm

Queens Botanical Garden
Free admission daily November through March.
Free admission on a Wednesday from 3:00pm – 6:00pm, and on a Sunday from 9:00am – 11:00am the rest of the year (except Festival days).

Rubin Museum of Art
Free admission on the first Monday of the month from 11:00 – 5:00pm.
Children 12 and under are free at all times.

The Bronx Museum of the Arts
Always free admission.

The Museum at Fashion Institute of Technology
Always free admission.