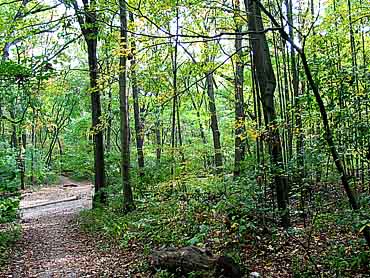 This is one of the best places in the world for early spring foraging, with a wide selection of wild herbs, greens, roots, and even some cold-weather mushrooms. Habitats include miles of mature forest, as well as the trail edges, and the disturbed, overgrown, and cultivated habitats that provide homes for all sorts of diverse species.

Burdock, a root vegetable prized in East Asia and served in Japanese restaurants, grows in view of the baseball diamond quite near the meeting spot. Cultivated as gobo in Japan, it provides a savory root vegetable, good for a wide range of recipes, from soups to “Wildman’s” Vegan Beef Jerky.

Bitter dock looks like burdock, but the leaves are smooth underneath, not whitish, like burdock’s. Not tasty raw, it imparts a lemony flavor to any recipe that calls for greens, and you can bake it encrusted with sweet seasonings to make “Wildman’s” Sweet Dock Chips.

Savory hedge mustard and dandelion greens grow close to the starting point, across the path from the Parks Dept. administration building, The Overlook.

Further into the park we’ll find sweet cicely, which tastes like black licorice. This one’s easy to unearth, and there’s so much in Forest Park, you can’t harm the environment by collecting reasonable quantities.

Sweet Cicely
Use this flavorful delicacy in any soup, stew, or casserole that calls for root vegetables; in oatmeal, where it will transfer the porridge into something heavenly; and in dessert dishes.

Herbs and greens we’ll be looking for include honewort or wild chervil, which tastes like parsley, celery, and carrots; sassafras, the original source of root beer; black birch, which tastes like wintergreen, garlic mustard, with garlicky leaves and horseradish-flavored roots; corn-flavored chickweed, and onion/garlic-flavored field garlic leaves and bulbs.

The forest is one of the best for mushrooms. We’ll be looking for early-season species such as oyster mushrooms and tree ears.

The 4-hour foraging tour of Forest Park begins at 11:45 AM, on Saturday, March 27, at the stone wall at Forest Park Drive and Park Lane, near the Parks Dept.’s Overlook Building, 8040 Park Lane, in Kew Gardens. Don’t go to the Woodhaven side of the park!