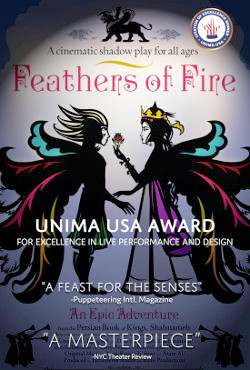 “Feathers of Fire–The Movie” is an ingenious production of theater-on-film, conceived and directed by Hamid Rahmanian. It is intended for audiences aged 5 to 105.

This film is a video version of “Feathers of Fire,” the most elaborate shadow theater experience ever created, which was presented by BAM and other venues worldwide from 2016-2018 and won the UNIMA USA award for excellence in live performance and design. The plot is an action-packed tale of two star-crossed lovers of old Persia, based on a story from Shahnameh (the Persian Book of Kings). Zaul, an outcast albino boy, is brought up by a bird-goddess and grows up into a wise ruler. He enters into a forbidden love with Rudabeh, a princess who is the granddaughter of the dreaded Serpent King. Their young, impetuous romance survives many precarious adventures before they finally receive blessings for their union. When they ultimately have a child, it is Rostam, “the Hercules of Iran.” Aspects of the story are reminiscent of “Romeo and Juliet,” “Rapunzel,” “The Firebird” and “Jungle Book.”

The piece is created and directed by Hamid Rahmanian, a 2014 Guggenheim fellowship-winning filmmaker/visual artist living in Brooklyn. It is endorsed by Francis Ford Coppola, who called the production “Fantastic! One of the greatest epics of all time and my favorite Shahnameh brought to life in a spectacular fashion by Hamid Rahmanian with shadow puppets design and cinematic wizardry.”